THE STORY BEHIND THE STORY - Rebecca Buckley's Blog
Welcome to my blog. Here I'll talk about almost anything. Depends on the mood of the day. I'll also talk about publishing, writing techniques, and editing ... subjects close to my heart. So today, anytime you feel like it, feel free to jump in ... click on the COMMENTS link at the end of a post and give your opinion. If you sign in "anonymous" to comment, it's easier, just be sure you say who you are in the content of your comment.

HIBERNOPHOBIA and the GYPSIES

I hadn't realized how strong Hibernophobia is in the UK until I began watching the TV series: My Big Fat Gypsy Wedding.

It breaks my heart that such prejudices still exist today against a people from Ireland. The Irish Travellers that are depicted in the television series suffer the most discrimination and racism throughout the UK. Today it's as bad as the whites' early prejudices against the blacks in the USA. Signs such as "No Travellers" and "No Irish Need Apply" are indicative of an unmerciful, unkind people.

I know, I know . . . the religious war between the Irish Catholics and the British Protestants was the initial dispute, but for heaven's sakes, what the hell is it all about now? And to top it off, antiziganism (prejudice against gypsies) is dumped on top of the Irish prejudices.

Did you know they have a very strict moral code? They don't marry outside their kind, and divorce is not an option? True, the life isn't for everybody, but those that have chosen it should be able to live as they wish without prejudice.

In the show I watched tonite ... the wedding planner called over 50 venues to accommodate the reception. But as soon as the hotel would find out it was a traveller wedding they immediately came up with one excuse or another to reject them. Their weddings are huge, and some drive their campers, so the venues have to be spacious. Not easy to find the right site because of those two requirements, either.

They finally found a kind soul - proprietor of an animal shelter, a beautiful building by the way - who accepted them and bent over backwards to make it a fabulous and memorable event for the bride and groom. I know that might make you giggle - an animal shelter, etc., but think about it. Regardless of how well it turned out, is that really fair?

I'm really pissed about it all. If it were left up to me, I would go to Wales and England and build centers for weddings, and would rent them FIRST to travellers and gypsies.

Oh, and maybe you've seen the documentaries about the removal of travellers' camps throughout England ... how they are being ousted, their trailers trashed and burned if they don't move at the nearby council's discretion?

It's a human disgrace. It is. I would also go to England and buy up property and build grounds to house traveller trailers and gysies. I'd make the accommodations modern and comfortable for them. I'd plant trees and shrubery around the perimeter so they wouldn't be bothered, so they could live a good life as others do without prejudices.

They're a very proud, colorful, and dramatic people, historic. They love hard, play hard, and live hard. They don't drain the government coffers, they work for their livings, for themselves and others, and they are loyal to their people.

As I mentioned, they have to marry within their ranks, and rarely do they break that code. They are religious, marry very young and have many children. One thing I don't abide by, however, is that supposedly on the bride's wedding night, the husband beats her to let her know who is boss. No no. But I'm not sure if that is true today, or if they all do it, if so, I would hope that is changed sooner than later.

The ones who give the traveller's a bad name, of course, are the ones who go out drinking and fighting, disturbing the peace. And of course you will find crooks and criminals among them same as those in other cultures. All cultures have bad men and women, sad to say. But it isn't fair to discriminate against all, those who are not.

Something you may not know, the women aren't allowed to go to nightclubs without their men, which I find interesting. But when they do go out, the women dress prevocatively, most likely for themselves and for their own, or for prospective husbands. The weddings are the meeting places for new couples, by the way. People come from all over the country to the weddings. A wedding is a major event.

I find them fascinating. And I find it appalling that they are treated with such disrespect. Most of the families live quietly and peacefully, to themselves, within their communities.

They are human beings after all, just like the rest of us.
at 10:06 PM No comments:

A Different Kind of Day

Yes, today was a different kind of day ... unusual ... interesting.

It began with 'Oreo' chasing a mouse into my bedroom at 3 a.m., bumping into chairs and tables, skidding across the floor, rattling decor, scratching at cabinets. Of course I didn't know that was what he was after till I turned on the light and caught a glimpse of the little critter trying to escape from Oreo's clutches. One second he'd be caught, the next he'd get away. It went like that, from the bedroom to the kitchen to the living room and back again, till this afternoon when I finally entered the fracas and enveloped the little guy in a Russian Shawl that swags across a chair and put him out the front door. He didn't appear to be injured, just stunned. He disappeared within five minutes, once again happy go lucky. But it was confusing to Oreo, he's been watching the two spaces intermittently - one in the kitchen, one in my bathroom - where mousie would get up under the cabinet and rest, hoping to see him again.

THEN . . . I don't know what got into me today, for I spied a package of raw cranberries in the fridge and wanted to do something with them before they were a total loss, have been here since Thanksgiving. Well, I decided to make some jam or sauce, whatever you want to call it. I boiled a cup of water and a cup of sugar first with a couple tablespoons of ground lemon peel. Then added the package of cranberries (2 cups) and 2 cups of blueberries. I always have blueberries on hand - frozen whole berries. My taste imagination was at work and I added a third cup of orange marmalade to the mix, stirring occasionally over a soft 10-minute boil. I poured the mixture in a glass bowl to cool to room temperature, then refrigerated. Voila! My fabulous Blueberry Cranberry Citrus jam or sauce. And I mean it is good. I put some in a jar to use as jam, and the rest will be used as whatever. I don't know what possessed me to think of creating a recipe. But I'm glad I did. Felt good not to waste the cranberries. And I now have another recipe for the cookbook I'm writing.

THEN . . . the proof of E. Don Harpe's novel NEON RAINBO arrived this afternoon. So I've been doing one last read-through and edit before the launch of the book. It's a paranormal fiction this go 'round for Mr. Don. This one is turning out to be my favorite of his. It really is a must read, guys. Terrific book! Here's the blurb:

MORGAN NICHOLS was caught up by the music same as
the thousands of other hopefuls who came to Nashville
chasing the dream they called the Neon Rainbow.

The rhythm of steel guitars and twin fiddles had been
playing in his head since he was fourteen, and now he was
immersed in the heavy atmosphere at the bottom and craving
the thin, heady air that awaited his rise to the top.

He wanted it all, and he was willing to do whatever it took
to get it, including making a deal with the Devil. The Neon
Rainbow was real, and in a honky-tonk in Alabama that had
burned to the ground in 1957, he reached out and grabbed
it. Now all he had to do was figure out how to hang on to it. 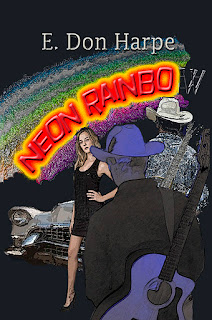 THEN . . . I did some accounting, working with Excel spreadsheets, since the annual call came from the tax man. Gawd, I hate compiling all that stuff, although it isn't as difficult as it was at one time. Now I keep a monthly accounting during the year so I have the monthly totals at hand, just need to add them up. Easy, really, to do with Excel. I learned several years ago how to create Excel spreadsheets, when I worked for Barnabey's Hotel in Manhattan Beach. My boss, the GM, was an alcoholic and sometimes couldn't function, so right off the bat he taught me how to do his reports - spreadsheets, 90-day and annual forecasts, budgets, etc. Valuable stuff he taught me. I was his assistant, so that worked out well. Anyway, ever since then I've had several occasions to use that expertise with companies I've worked for, and in my own personal accounting. So today was also an accounting day.

AND ... then there was all the stuff in between. It's been a rather interesting day, as I said.

RJ Buckley
I am Rebecca Buckley. Let me see, what shall I say ... okay ...I am a writer, first and foremost, but I love to travel too. I also sing and play the piano for my own enjoyment . Am a painter, and an avid reader.

I LOVE TO SING!

Click here to hear some of the songs I sing on my "When I Fall in Love" CD. A fun recording made for family and friends.

AND HERE'S MY RADIO SHOW

A Few of My Most Popular Posts