THE STORY BEHIND THE STORY - Rebecca Buckley's Blog

Welcome to my blog. Here I'll talk about almost anything. Depends on the mood of the day. I'll also talk about publishing, writing techniques, and editing ... subjects close to my heart. So today, anytime you feel like it, feel free to jump in ... click on the COMMENTS link at the end of a post and give your opinion. If you sign in "anonymous" to comment, it's easier, just be sure you say who you are in the content of your comment. 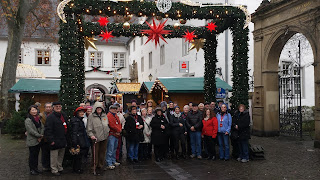 HERE WE ARE ... the group I was with most of the time on the walking tours through Christmas Markets in the Netherlands, Germany, France, and Switzerland.  It was quite an adventure for all.

A Rhine Riverboat Xmas Market Cruise ... we lived on the riverboat for twelve days, then disembarked for the last leg of the trip in Basel, Switzerland where we stayed in a very modern hotel - quite a contrast to all the lovely European historic sites we visited.

This trip was a Godsend to me, gave me time and space to gather my thoughts and plans for the future after such a trying, eventful, two years past.  It was a jumping off space, actually, for me.  Leaving everything behind - sadness, stress, worry.  It felt like an opening up of a new life. Now that I'm home again, I feel completely refreshed and sorted out.

Terrific trip!  I suggest everyone do it at least once in your lifetime.  Grand Circle Travel was my host.

Happy Holidays to you all!
at 8:35 AM No comments:

ANOTHER ERA HAS PASSED!

Yes, my most-times charming husband has passed on to another life ... and in doing so has forced my life to change and pass into another era. Jim and I married in 2001 right after 9-11.  In fact we were staying in Santa Monica for my birthday week when the Twin Towers fell that day in September. It seemed to speed up our decision to marry, realizing how precious and short life can be.  We had headed to the altar a couple times before, each time outside interference got in the way.  But that time, after 9-11, we pushed headlong into it, went to Vegas and married on September 26.  Now he is gone! Passed on September 23. Just fifteen years later. Sad times.

And now my life has taken an unexpected turn.  I had sold my home in Arizona to be with Jim full time a few months after his son and then my son had fatal heart attacks four weeks apart.  I joined him in 2014, after living apart for a few years.  We were still married, hadn't divorced, just weren't living together for some very good reasons. Then Jim's health took a turn for the worse mid 2015, and I was so grateful I was able to take care of him with the help of Hospice and part-time caregivers. I was happy to be there for him. Took over the business and house projects.

It was our wish that the beautiful Buckley home would continue to be my place of residence, that I would be able to assume the reverse mortgage that he had taken when his investments went sour in 2006 or 7.  The investment company went belly up and took Jim's money with it, as well as a multitude of other investors' funds.  So he mortgaged his home that was free and clear to be able to survive.  His other income producing property didn't produce enough to cover his huge expenses.  Well, long story short, because the reverse mortgage isn't a HUD insured reverse mortgage, the 'non-borrowing-spouse' cannot assume the loan. I either have to pay it off, sell the house before foreclosure, or just hand it over to the reverse mortgage company.  I'm selling it.  Fingers crossed it will sell quickly.

So now I have to move again.

There is more to this story, but I am tired at the moment and don't want to dwell on it anymore today.  So, I'll pick up where I am leaving off in a couple days. 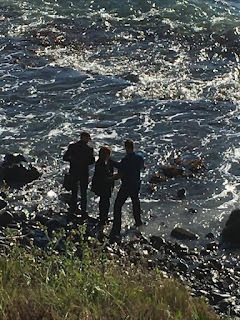 On November 14, I strew the ashes of my late husband James David and his son James Lee's, as well as those of my own son James Barry.  It was an intimate gathering of friends and family that witnessed the ceremony led by Rev Jay Powell on the cliffs overlooking the Pacific, a spot down the hill from our home where Jim and I used to take our lunch and sit on the bench to enjoy the environment.
Now the fellas are free ... free to return to 'whence they came' ... and many of us will and are missing them so much.  Jim was 102, James Lee 65, James Barry 51.
My life is changing once again ... I've decisions to make in the next few days, decisions that will not cause too much upheaval if I can help it, but big changes nevertheless. And although my place of residence will change soon, I'm happy in the fact that I'm healthy and  I always have my constant mind and love for a life that is full of adventure and wonderment.  No complaints here. I roll with the tide ... see me out there rolling?  lol lol lol
at 9:31 AM No comments:

CAREGIVING FOR THE ELDERLY - could you do it?

While doing some research and reading on caregivers, I came across the following:

While many caregivers find much meaning in being able to help a loved one, there are health risks associated with long-term caregiving:

In addition to health risks, caregivers can experience financial strain associated with illness expenses, passing up promotions, and reducing work commitments in order to continue giving care to a loved one.

How many family caregivers have you come into contact with or have known that reflect any of the above?  I can remember when my sisters and I each had a turn at taking care of our mother in her last years.  It wasn't easy, we did what we could to ease her stress and illness, not wanting her to go to a facility. Alas, the inevitable happened anyway. It wasn't feasible for any of us to do what had to be done 24/7 with mother.  I still feel guilty today because I couldn't do it longer, and I know my sisters feel the same way. My father did it right. He didn't give us a chance to do any caregiving for him.  He had a massive stroke one day and two days later had a massive heart attack and passed ... it happened so fast. Mother had a stroke and lasted six years more. Finally she just couldn't hang on any longer, congestive heart failure took her.

Now I find myself caregiving my 102 year-old hubby of 14 years, going on 15.  Not caregiving that long, married that long. Just recently got back together after the loss of his son last year, one month before I lost my son.

I do have help in the mornings with my husband, which is a godsend.  The main medical care is done by professionals each morning, a 4-hour shift.  My responsibilities consume the rest of the day and night ... 20 hours. Thank goodness we both sleep well, so that takes up at least 9 hours for him, 6 or 7 for me.  And I use those extra early morning hours to get work done without distraction - accounting, other business, and housekeeping.

But what scares me the most is the nite-time ritual, which I've been doing of late ... when he is at his weakest and most vulnerable.  I'm so afraid if he begins to fall I won't be able to stop him, and it's been pretty darn close. Plus he doesn't have full control over his bowels, and has a permanent  catheter, which adds to special care. Not being able to walk increases his risk of falling when I move him from chair to chair to toilet to bed ... his motor ability isn't adequate enough, especially when he's tired ... and that's at night.  So as much as I didn't want to hire nite-time caregivers 2 hours a nite, I've had to do it once again.  The expense is stressful, but I don't feel I have any alternative. I've tried to do it myself and I've panicked when near falls have occurred, and that's even more stressful than lack of money to pay for help.  I believe I'll have four nites covered by others, though, beginning this coming week, which leaves three nites for me to handle.  That's better than doing seven.

So ... Bullet One above ... certainly applies ... stress of proper caregiving and stress of inadequate funds.

Bullet Two doesn't seem to enter into the equation for me. I'm not depressed, don't feel held back or restricted, I have my mornings to get out and about if I want, to run errands and shop, do meetings, etc.  I have my cats, my writing, books to read, movies to watch, beautiful scenery. So no, that doesn't apply as of yet.  Jim and I have much in common, work on things together.

Bullet Four ... well, I don't have any more health problems than I had before. So I would have to say no to this one, for me.

Bullet Five ... I hope not!  But I've seen it happen.  Please, God, not me!  Way too much to do and accomplish still.

Bullet Six and Seven ... no sign of either yet.

I don't mean to put too much attention on my particular caregiving experience ... it's just that reading about it made me think about it all, am thinking about how it effects other caregivers, the ones who do it for a living.  How difficult that must be!  Right now we have two good ones, morning ones. And I'm very happy with them.  Both are conscientious, kind, and caring, know what they're doing.  I'm so grateful!

So here's to the terrific caregivers of the world!  You are the best!   May all your wishes come true!

From this writer to you ...
Let me see, what shall I say ... okay ...I am a writer, first and foremost. I love to travel. I also love to sing and play for my own enjoyment (have a digital mini baby grand piano and speaker/mic system). Am a painter, but not lately. And am an avid reader of course, can’t be a writer if you don’t read beyond the norm. MY PLAN TO TRAVEL THE ENTIRE YEAR OF 2020 ... was sabotaged by COVID-19. Plan was to go to different countries every three months. AND to take the QM2 on an Atlantic Crossing for my 80th birthday in September, while writing my memoir EIGHT HUSBANDS & OTHER LOVERS.

I LOVE TO SING!

Click here to hear some of the songs I sing on my "When I Fall in Love" CD. A fun recording made for family and friends.

AND HERE'S MY RADIO SHOW

A Few of My Most Popular Posts